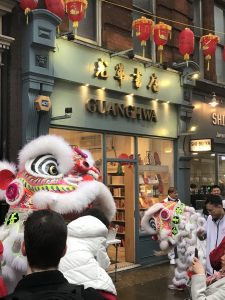 Chinese New Year (CNY)… social media posts tend to package CNY up as if it is something very exotic, or an event that is only of interest to astrologers, diviners and Zodiac enthusiasts. Turning to Google to ask “what is the year of the ‘Ox’ about”,  you get confronted with draining-ly technical explanations such as: “The Ox is the second of the 12-year periodic sequence of animals which appear in the Chinese zodiac related to the Chinese calendar, and also appears in related calendar systems.” (Wikipedia)

Right… but what is it all about really…?

While the Zodiac animal is of concern to a relatively small array of traditionalists, (particularly in the South East of China, in the environs of Hong Kong) for most in China and the Chinese diaspora around the world, the Chinese New Year, a.k.a Spring Festival, (春节–chūnjié), is just a time to have a break from work and come together with family and hometown friends—remembering those that are no longer with us, bingeing on delicious home-cooked food, drinking hard Chinese liquor (白酒 báijiǔ), setting off endless streams of fireworks (with the latter two activities occurring worryingly hand-in-hand), and, of course, getting presents (!).

In this unusual year where travel restrictions mean that the largest annual mammalian migration is reduced to a trickle, we, the Gotoco Co-founders (Lisha, Danny and Richard) thought we’d share some of our Chinese New Year memories with you:

When I was young, Chinese New Year meant it was the winter holidays! So I’d come home delightedly from boarding school and get to spend lots of time relaxing, eating good food, seeing family and getting presents (红包 hóngbāo, red envelopes!). I guess Chinese New Year is not quite as fun as an adult as it was as a kid, but I cherish the festival as its one of the few times I get to see my family. They live in a village in Henan province, which is far removed from my home in bustling Beijing, and distance-wise its like going from London to Edinburgh.

I have lots of great memories of Chinese New Year growing up. As a kid, apart from the fun of seeing everyone, I cared most about two things: ‘lucky money’ and new clothes!

Lucky money: On the first day of Chinese New Year, kids get lucky money in a red envelope (红包 hóngbāo) from their parents, grandparents, uncles, aunts, whoever is older than you will give you a red envelope, so often you feel like you are the richest kid in the world on new year’s day. My parents often put them under my pillow before I woke up in the morning, and my grandparents often teased me by making me kowtow (bow with my head tapping the floor) to them for the red envelope. Then we’d go to every single shop in the village to buy fireworks, sweets or anything else that we couldn’t normally afford. Often on the first night of new year, there is a tradition of 守夜 (shǒuyè—night vigil), which meant parents didn’t ask you to go to bed early, so all kids, adults, grandparents would all be on the streets until dawn, just having fun: walking, talking, drinking around fires, setting off bangers and fireworks, playing games.

New clothes: on the first day of new year, you are meant to wear new clothes to welcome the first day of another year, so my mum often brought us to the market to buy new clothes and shoes a few days before new year, which was so fun, because villages only have one market a week and new year market is the biggest. Then, on New Year’s Eve, mum would put new clothes between two quilts to warm them up for the morning. We often woke up very early on the new year morning to put on our new clothes and go to see our friends in the square and of course show each other what we’d got. When I was young, I also often remember heavy snow around new year in Henan province where I grew up, but nowadays there’s barely any snow. I remember my uncles or elder cousins would drag us small kids along the snow, and sometimes we’d have a competition to see who can sled fastest—we could never get enough of that fun.

The last CNY that I spent in China was the most memorable though. My fiancé and I arrived late to her village while her family’s banquet was in full flow. Entering the room I was struck to note that seemingly everyone from the 90-year-old granny matriarch, to the younger kids were downing shots of hard liquor and bottles of beer; singing in merriment; coughing away on highly dosed cigarettes and just having a great time. Though I am a non-smoker, it was impossible to turn down the hospitality of many hands brandishing the poshest cigarettes available on China’s market, while as a guest from afar multiple glasses of liquor were obligatory.

Once the carouse crescendo’ed, I recall going out into the misty gunpowder whiffing village lanes (to shǒuyè–night vigil). We ran around delightedly, re-living the naughtier days of our childhoods by throwing fireworks in all directions. My revelry was paused only briefly when a firework lobbed towards me vaporised the denim and skin of my groin, but one baijiu compress later, the party resumed.. CNY Day 2 (then day 3, 4, 5) began with a breakfast of double-sized shot glasses of the same hard liquor, washed down with potent and delicious bowls of pickled blue garlic and celebratory cigarettes.

In spite of what Orientalist posts may tell you, nobody particularly cares which animal is on the Zodiac…nor is Divination and soothsaying a major concern. However, the spiritual traditions of the past do add an element of fun and romance to the festivities. Nobody particularly cares, but it is fun to talk (and toast) about the ‘Earth Ox’ and its ramifications for your future luck/wealth/marital/pandemic prospects, plus  you might wear red underwear if the animal is the one of your birth year (supposedly to ward off demons and bad luck, just in case…).

The real tradition of importance is the  reunion of families and friends that have made great efforts to migrate across China’s immense landmass for an ephemeral stint of a few short days. Thus, this annual migration represents the world’s largest migration of mammals whenever it comes around. Families that have been divided by the exigencies of booming economic growth, not to mention thousands of kilometres, get an annual chance to relax and reconvene. Even amidst COVID few have given up on this wonderful tradition. I guess that in these respects it is much the same as Christmas is in the ‘Western world’.

2013, during my year abroad in Beijing, was my first Chinese New Year spent in China and it was definitely my most fun and random one to date. Since I graduated, Chinese New Year has been a good time to travel given the lull in work so I’ve spent the last few New Years out of China, but that year was a chance to immerse myself fully and spend time with Chinese friends. That year, I was fortunate to fall in with a lively local football team of hilarious Beijing’ers that, over the years, have become my family in China, teaching me far more about the language, culture, people than any of my studies.

In February 2013, one of the team, Wang Kui (王奎), invited me to spend the Chinese New Year with him and his family, all of whom I knew well by this point. On arrival, I was given a beer and I was taught how to fold dumplings by Wang Kui’s wife, Lü Jun, so I could help add a small malformed number to the hundreds that she, Wang Kui’s mother and his son were quickly piling up (I managed about five in the time it took them to finish dozens…).

Over the course of the evening, Wang Kui plied me with copious amounts of baijiu (Chinese hard liquor), I gorged on the dumplings and all the delicious food, under the watchful insistence of Wang Kui’s mother, and we watched the annual New Year’s Eve gala on TV, an important Chinese New Year tradition.

Just as the baijiu was really taking its toll, the clock struck midnight and Wang Kui grabbed me, his 13-year-old son, and a big bag of fireworks and we went out into the square between the high rises in their residential area. The scene was the complete antithesis to the health and safety that I was used to back home—children running around everywhere with firecrackers, throwing them with abandon, and others incessantly setting off some of the largest fireworks I’d ever seen in random spots on the compound. The sky and air was full of bangs and flashes, and it was a lot of fun, until I noticed a child had lit a firework beneath me and I decided it was probably time to head inside.

For the rest of the holidays, Wang Kui took Cesar, the Spanish teammate that had introduced me to the team, and me to Shanghai for a family friend’s wedding. For the first few days, he toured us around Shanghai, visiting the Yu Yuan Gardens, the Bund, eating tasty Xiaolong Bao (Shanghai dumplings), drinking with Wang Kui’s family and friends, and hopping on the high-speed train to Hangzhou to see the West Lake and visit several temples.

The centrepiece of the trip, though, was the wedding, for which Wang Kui insisted on buying Cesar and me traditional Chinese shirts, that felt all the more conspicuous and inappropriate when we arrived at the wedding and everyone else was in hoodies and t-shirts! Wang Kui did at least also wear the formal shirt to save some of our blushes.

As the only foreigners at the wedding, Cesar and I were invited by the MC to give a speech to the bride and groom. After giving a short congratulatory speech in my highly-suspect Mandarin, trying desperately to remember the key phrases that Wang Kui had been drilling us on, we each gave them a traditional hongbao (red packet) with pounds and euros in as a gift.

I thought our part in the proceedings would now be over, but the MC had other ideas, asking Cesar and me to dance to Gangnam Style, all the rage back in 2013, for everyone. Luckily, Cesar knew the moves so I could fumble along beside him, before we then had to go around the room downing glasses of huangjiu (黄酒 ‘yellow wine’, popular in Shanghai and the surrounding Jiangnan area) with all the key guests. Needless-to-say, I was a little worse for wear by the time I had to have a (apparently traditional) cigarette lit for me, despite not smoking, by the bride and groom (into their third change of dress and suit of the proceedings). It was only 3pm. From late afternoon, we moved onto a bar before ending up in Mint, a popular club in Shanghai, and then nursing our hangovers in the French Concession the next morning.

That’s definitely the Chinese New Year that I’ll remember best (and worst) for the rest of my life. And no, I don’t remember what the zodiac sign was. 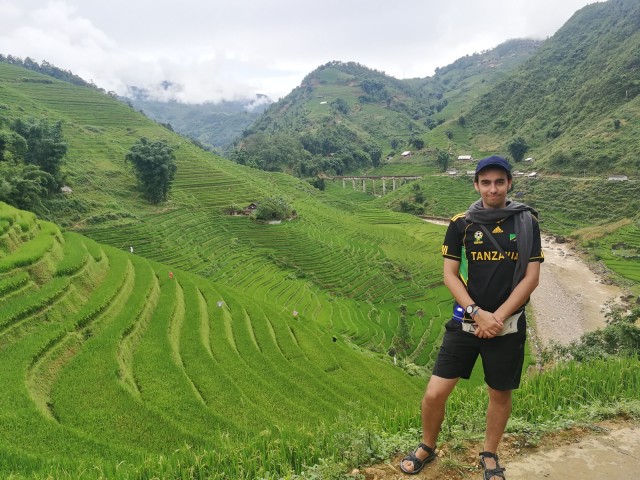 Moving Abroad to Teach In this blog, we hear from Max Thomson, a Cardiffian teaching English in Asia who will

Beijing Living: Interview with DJ Dirty Dishes   Danny, Richard, and Lisha, the Gotoco co-founders, have lived in Beijing for

How’s day-to-day life on an internship in Beijing?